Can you guess what we did this weekend? I'm sure the title of the post doesn't give anything away :)  We finally  look like locals because we officially own a bike!  We went into a few places on Friday to look at some and get an idea of what we wanted/needed.  We went home knowing we would be coming back on Saturday to buy one.  Let me tell you Brent was like a kid on Christmas morning.  He was so excited to get and ride this bike. So Saturday morning we went out and got Brent a haircut(more on that later) and went down the block to get our bike.  We decided to start with one bike and see how it goes and if we think we need to get another one.  I was amazed at how expensive some of the bikes were, I saw one for 750 euros($980!!).  Brent made a good point though that most of the people don't have cars and use the bikes as their main means of transportation. 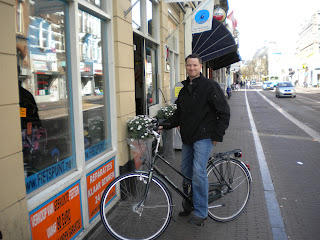 Right out side the store he had to jump on!  On the back there is a small little "seat" where Brent thinks I can sit while he bikes, yeah that didn't work out so well.  Anyone who knows me, knows I am not very coordinated so trying to get on the bike while it was moving wasn't working for me.  Needless to say, I walked home while Brent took the bike. 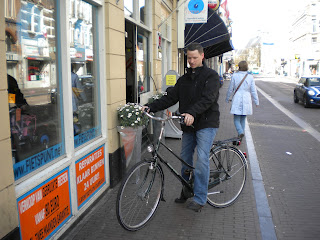 Getting back to Brent's haircut.  Both of us are in need of a haircut and he decided to be the first one to try it out.  He calculated the amount he wanted left on his head into centimeters thinking it would be easier for the hairdresser.  It didn't help.  He walked out looking like he was shipping off to the army.  Still looking just as handsome though :).  Now he knows for next time!
Oh and for anyone who wants to know what the bike traffic looks like here I attached a link below.
http://vimeo.com/12306923
Mindy

Posted by Mindy Anderson at 6:39 PM